Goings-on and the zoo

I've written about The Escape once about a year ago.  Since then I've become President of the group.  It wasn't a big change.  Jeromy and I had planned activities for five years.  So many months of the year have set activities.  I was sad to see Jeromy leave his leadership of the group.  But I understood his reasons for leaving. 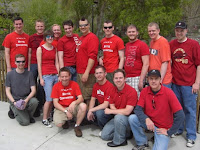 May is one of those months with an annual activity.  Any of you that are friends with me on facebook, or members of the group on Yahoo or facebook already know.  But this Saturday we're going to Hogle Zoo for The Escape's Annual Gay Day at Hogle Zoo.  Wow, that was a mouthful.  This is activity is my baby.  QSaltLake hosts gay day at Lagoon annually.  I want Gay Day at Hogle Zoo to be large enough that it would go on even if I didn't go.  I want it to be The Escape's and my legacy.  Facebook has been a really good tool to make that happen.  Right now we have nearly 150 people planning on going.  It would make me immensely happy to go to Hogle on Saturday and see a sea of red shirts.

I don't think we're there yet.  But with time we could achieve that dream.
Posted by BigRedHammer at 12:14 AM

Gay Day @ Hogle Zoo is all day. The Escape will be meeting at the entrance at 1PM. Remember to wear your RED shirts!