2006 ends in 13 hours from now. It really doesn't seem possible. But I have to say that this year has been a great one. I'd even say one of my best since my mission. I've made a lot of good changes this year. But enough reminiscing. I hope that each of you had a great Christmas with your friends or family. I was only home for two and a half days, but they were all great. Saturday we had our extended family reunion. It went really well and was a no stress event! (For once!) Having Christmas eve on a Sunday was wonderful as well. It gave us time to think about the spiritual side of Christmas... the most important part. I'm very thankful that the Savior came to earth and even in the form of a helpless baby.

Christmas day was wonderful as well. My parents and I woke up and opened gifts. We all received and gave great gifts. A little later, my sister and brother-in-law and nephews came over. We had our traditional Christmas breakfast and then opened each others' gifts. My nephews *loved* the gifts I gave them. I'll say on my part that the Roboraptor was an awesome idea. After they left, my parents and I headed up to Logan to visit my brother and his family. We ate our traditional Christmas dinner there. Mmm... spiral cut ham and homemade mashed potatoes. Then we opened gifts. They loved their gifts as well. Family really is what makes Christmas important and fulfilling.

I hope that all of you had positive and eventful years. I do count myself lucky to have you as friends.

Merry Christmas and a Happy New Year!!!
Posted by BigRedHammer at 10:48 AM 1 comment:

Wow! Can you believe it?

Bolden celebrated her 116th birthday in August, making her the world's oldest living person. Since suffering a stroke in 2004, Bolden was unable to speak, though at the time of her birthday she was alert and enjoyed eating ice cream while surrounded by members of her family.

No other member of Bolden's family has lived past the age of 100.

Posted by BigRedHammer at 10:30 PM No comments:

I have to say that the open house was a success! Thanks guys for coming. I had a great time and I hope that all of you did too. We'll have to get together again after the New Year. Oh especially since I can now have spectacular movie nights with our new TV. I look forward to seeing you all again. Oh and as for the pictures, you should be able to click on them, enlarge them, and download them. Let me know if you have any problems!

Posted by BigRedHammer at 6:07 PM 2 comments:

Some Trees from the Festival of Trees.

Posted by BigRedHammer at 10:36 AM No comments: 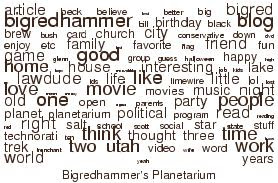 This is my blog's word cloud. If you're unfamiliar with the concept, the size of each word reflects its frequency on my blog. I was looking for a word cloud that would update periodically. If you find such a thing, let me know. Otherwise, you can get your own word cloud here.
Posted by BigRedHammer at 10:50 AM No comments:

The Church has changed

*lol* But perhaps not in the way you think. During last General Conference I found this article
on the various changes the programs of the Church have undergone the in the last few decades. I learned a lot of things I didn't know before. I'll post a few of the interesting ones here.

Fast Day — Starting in 1896, Fast Day was set on the first Sunday of the month, instead of the first Thursday.

Priesthood advancement — The First Presidency formally adopted the ages of 12, 15, 18 and 21 as ages for deacon, teacher, priest and elder advancement starting in 1908. The age was reduced for teachers and priests to 14 and 16, respectively, beginning in 1954, and the age for elders was lowered to 19 at about the same time. Seventies quorums in stakes throughout the church were discontinued in 1986.

Primary — Presiding officers of the Primary were called presidents, rather than "superintendents," starting in 1942.

Student wards — The first appeared at BYU in 1956 and the practice expanded to other universities.

Home teaching — "Ward teaching" was replaced by home teaching starting in 1964.
Posted by BigRedHammer at 8:06 PM No comments:

No, that isn't the sound of sleigh bells. It is the sound of keys. More specifically, the management keys to The Sharper Image. I received a promotion at work. I am now the Senior Sales Associate. And that makes me a member of management. Along with those keys I get a lot more responsibility and tasks. I can do returns now, open the locked cabinets for items, do mail and phone orders, close and open the store, count registers, etc. I also work full time, get a pay increase of a dollar, get benefits (such as paid vacation, sick leave, paid birthday), and insurance (health, dental, and vision). I'm really excited. I wasn't the only applicant, but my availability made me a good choice.

I have to say, it feels great to work somewhere where I am treated as an adult. All of my previous jobs, they didn't trust the employees. Asking for a day off was a hassle, rules had to be strict, everything was more difficult because there was no trust. But I guess that is how student jobs work. But I am very happy and very blessed to get this promotion. And my readers, when you have a chance, come in and visit me!
Posted by BigRedHammer at 1:50 PM No comments: