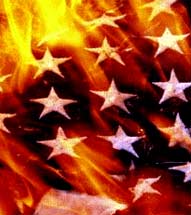 Tuesday the Senate rejected the constitutional ammendment to ban flag burning by one vote. The tally was one short of the two-thirds majority it would take to make the changes. It lost because three Republican senators voted against the measure, contrary to their party's choice. Senate Majority Leader Bill Frist and President Bush were both disappointed that the measure didn't pass. The ACLU was proud of the senators that dissented. Apparently the measure created a heated debate for two days.

I can understand that. Americans look at the flag as a symbol of what they believe in and the ideal of freedom. Most believe that flag burning is an insult that cannot be suffered. I disagree.

Yes, flag burners used to be called "stinkin' commies" on the mild side of things. And true to my blog's title (and moderate conservative viewpoint, there you go Aaron!) I will side with the flag burners in this case. Now before you stop reading my post and start writing your hate mail and replies, hear me out. Take a deep breath, step out of yourself and take a third person perspective. Then step out of your box too.

Okay, I believe Americans take themselves too seriously. And even more so, they take the American flag seriously. There is a strong link between our patriotism and our flag. It's a strong link that doesn't exist in many other first world nations. Canada for example, you can take a Canadian flag and sew it into a shirt or a backpack. *gasp!* And it's actually patriotic, you are wearing your flag! In America, the flag is reserved for poles and coffins only. It is after all, only a piece of material with a certain pattern on it. Whatever emotional value we place on it, is in our minds. I think we need to place less emphasis on the flag.

Now, this doesn't really tackle the flag burning issue. After all, making a backpack out of our flag isn't quite the same thing as protesting in the streets, burning flags, and wanting to scratch your eyes out because of tear gas. Free speech in this country is important. It has its limits and boundaries too. Free speech should not trample on other values we hold dear. Flag burning doesn't concern our other freedoms though. It is only a matter of free speech. And as inflammatory (no pun intended, okay it was intended) as it is to most Americans and as much as they hate it, it is Constitutional. This is one of those very, very, few times that I agree with ACLU. "We applaud those brave senators who stood up for the First Ammendment and rejected this damaging and needless amendment." said the director of the ACLU's Washington office.

Now to turn my big red hammer on Republican Senate Majority Leader Bill Frist. He said concerning the amendment, "Old Glory lost today. At a time when our armed services are defending America's freedom in the war on terror, it's unfortunate that a minority of my colleauges blocked [the proposal]." Oh, whatever! Let's look between the lines of that quote, (break out your magnifying glasses!): "I am linking the passing of this bill to our troops in Iraq. It is crucial that our flag not be burned if our troops are to ever come home. Democracy as we know will end abruptly if we cannot keep the American flag from being burned. You stinkin' commie turncoats that didn't vote for the bill!" Okay, so that was a little provocative, but you see my point. This bill has nothing to do with our troops in Iraq or the war on terror.

President Bush said concerning the bill, "By showing respect for our flag, we show reverence for the ideals that guide our nation. We show appreciation for the men and women who have served in defence of those ideals." Well, if you take his quote word for word, he is right on! We do show respect for our men and women in the military by respecting the flag. I agree wholeheartedly. But I do not agree that the law should enforce that respect and appreciation. We should make our own choice on whether we want to reverence American ideals or not and how we want to respect them in the end.
Posted by BigRedHammer at 5:00 PM

I totally enjoyed this post!
I agree with you.

If we Americans really want to show respect for our country why don't we ban the burning of rights instead of the burning if flags?

For some reason we have mistaken the image of our flag for actual freedom, which it is not.

Funny how we can freak out over the burning of cloth when the things it stands for are in much greater danger. It is so ironic that we would take away the rites the flag represents in order to "protect" the flag, this of course destroys the meaning of the flag which is far worse than any burning.

I enjoyed your little translation of that quote near the end. A wonderful post. I love your politial thoughts, Big Red.

Have a smashing day.