Glad to be Gay 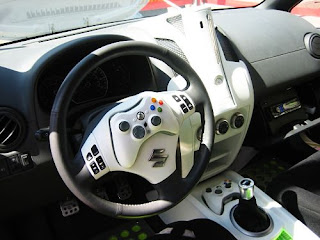 I once wanted to make a humorous t-shirt that listed one hundred reasons I was glad to be gay.  I never reached that many reasons and since then I've forgotten nearly all of them.  Yesterday I was reminded of one of them.

I was reading a "Dear Abby" style article in the paper.  The woman writing in wrote how she was sure her husband was having an affair.  She gave the dimensions of the "woman".  Then she spoke how her husband would spend more time with her and seemed to like her more.  "I know everyone would just advise me to leave him." she wrote.  It turns out object of her anger is a flat screen television and an Xbox 360.

Yes, she's jealous of a television and a gaming system.

I'm very lucky.  I'm partnered to Aaron, a guy who enjoys video games as much as I do.  No jealousy issues at all.  Don't get me wrong, I know there are plenty of women out there who enjoy video games.  (I'm sure many of them could kick my trash on Halo: Reach.)  However, we men out number them by... well, I can't even count!

I'm glad I'm gay because my partner loves (video) games as much as I do!

Now the letter didn't specify how much the guy is spending on the Xbox.  Is it two hours a day, or twenty?  Is it really a problem, or just the woman exaggerating?  Either way, this isn't the problem, it's a symptom.  I've known guys who spent all their waking hours on a console.  This wasn't because it was so enthralling or entertaining.  It was because they were trying to escape the pressures of life they found unbearable.

The "Abby" person wrote that the woman should try to find a game they could both enjoy on the console.  I think that's a great idea.  But I think along with that she should try to find out the cause of the symptom rather than just alleviate it.
Posted by BigRedHammer at 9:05 AM 1 comment: