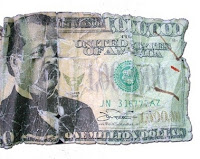 So I read an article yesterday about a man who tried to open a bank account with a million dollar bill. (The bill -to the left- is counterfeit.) When the teller wouldn't open the account, the man threw a fit. They ended up calling the police. The man was charged with two accounts of forgery (he had tried to use a fake check elsewhere.) and disorderly conduct. I think that if there were a $1,000,000 bill, that's probably what it would look like. Bravo to whoever drew it. He is a good artist.

Now onto my own customer story. And I will try to keep this one very very short, as I could rant on it for quite a long time. A fiery red-headed woman in her late 40s came in late last week. She had a counter-top mirror that's stand had broken. So she was going to return it and get a brand new one. Problem: We don't carry that mirror nor have we ever. I was helping her and I told her so. She got in my face and said, "Are you calling me a liar!?" I replied, "No, I just think that you are mistaken." When someone asks if you're calling them a liar, what they're really saying is, "You are a liar." She started getting out of hand. I told her that if she was going to make this difficult, then I wouldn't be able to help her. To make this ugly story shorter, my Assistant Manager ended up helping her. And this is the part that bothers me: She gave her credit towards a new mirror. UGH!

I hate this because it teaches idiots like this woman, that if she's loud enough, she'll get what she wants. I will not condone that kind of behavior. Second, I *always* try to back up my sales associates when they are helping a customer. If one of them tells a customer something, I back them up instead of correcting them in front of the consumer. It builds confidence in their decision making.

Now this woman should not have gotten any credit for two reasons. First, we don't carry that mirror. Second, even if we ever did, she didn't buy a replacement guarantee, which means that she only had 60 days to return it. And I would have remembered that purchase if it were within 60 days. Grrrr.
Posted by BigRedHammer at 10:00 AM

Yet again the reason I want to stay as far away from retail as I possibly can. Give me a cubicle where I don't have to interact with the public any day!

I'm sorry about your experience. It's sad a woman that age couldn't behave in at least a more gracious (not to mention honest and authentic) manner.

I don't mind working with the public (especially since I've only had a couple bad experiences thus far), but there's something comforting about the fact that I can pass the challenge to several someones who are more effective at stonewalling than I am.

remember how this woman acted next time you want to get your way...