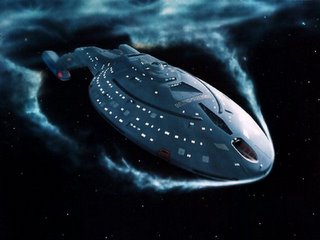 Well, for some reason I'm in the mood for Trek tonight. Well, I want to watch a Star Trek movie... but none of them interest me. So I looked up info on the "next" movie on Yahoo. That kept me happy for a little bit. Then I started checking up on my old Star Trek rpg. I didn't recognize any names on the crew.

So anyway, here are some of my ideas on Star Trek.

My idea has always been to have a non-UFP based series. At first I thought Klingons... but I scrapped that for two reasons. I don't find Klingons that interesting as a species. There isn't much in way of Klingon diversity of personality. Second, it would be hell for the makeup artists to put Klingon makeup on every character for every episode. So I came up with the Romulans. I never really considered Romulans as very much in the Trek world until I saw Nemesis. But face it, they're devious, intriguing, sneaky, emotional and multi-faceted. They take minimal makeup and costuming as well.
It would be fantastic to see the inner workings of the Romulan Empire. How are they coping with the fall of Shinzon? The Romulan-Vulcan unification movement, the awful Federation, etc.? There's so many possibilities. Now I think this could work for a movie too. The way I see it, we either need a spectacular movie and then follow it up with a great series or vice versa. I think a Romulan series would do better than a movie, but I'll take either! I miss watching Trek.
Posted by BigRedHammer at 11:38 PM