Yesterday I had one of the most awkward experiences of my adult life.  But before I share, I'll say it was awkward, but not embarrassing.  My face didn't flush and I didn't feel apologetic in the least.  But awkward... Yes! 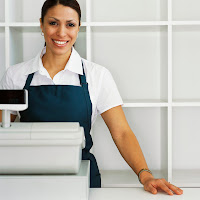 At work, we had a small rush of customers.  So I got on a register and started to ring people up.  The first woman in my line had been to the service desk a few minutes earlier to return some allergy medication.  She looked hopped up on it too.

I began to ring up her products.  She noticed my ring and said, "Is that a CTR ring?"  Which it is and in Romanian.  I get comments on it often, so I'm used to it.  This is where it gets very odd.  Then the woman paused and said, "No offense, but aren't you gay?"

If this had happened a couple years ago, I would have been embarrassed and denied it.  But I'm a different man since then.  I replied that yes, I am.  She started to go off, "How can you be gay and Mormon?  How can you believe in what they say about you?  Are you really gay?"  I told her that I have had a boyfriend for five years, so yes, I am gay.  And I do believe in the Church.  "That's awful!" was her retort.  The conversation continued in this line.

This whole time there is a guy behind her, waiting to be checked out.  There is a cashier next to me (that I wasn't out to) and her customers.  As well, the service desk person behind me.  So I'm the center of attention.  But surprisingly, I wasn't embarrassed.

I know that what she did was harassment and I didn't have to put up with it.  I could have said, right off the bat, "Sorry ma'am, but that is none of your business."  And it wasn't!  But as unlikely as it was to happen, I wanted to stretch her mind.  Just because you're gay doesn't mean you hate religion or the LDS Church.  Just because you're Mormon doesn't mean you hate gays.  There is middle ground.  A place of mutual respect.

I do agree that at the checkout stand of a retailer is not the place for this kind of conversation.  But I refuse to back down. 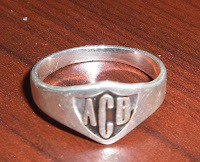 So it's odd, being harassed--not for being gay as you'd suspect--but for being religious and gay.  It isn't the first time either that I've been the subject of gay/religion harassment either.  My manager at "Our Store" in downtown did the same thing because of my CTR ring.  I wouldn't be surprised if my being Mormon was the reason I was let go.  So odd that this happens in Salt Lake City of all places.

As a side, when I shared this story with my friend Dan, he replied, "How did she know you were gay?"  Thank you Dan.  That made me feel better.  As proud as I am to be gay, I never thought it was that obvious to a passerby.  Especially in the short time a checker interacts with a customer.

Good for you standing your ground. Hopefully a lot of people heard and had their minds opened a bit! BTW, is your CTR ring rainbow colored?

I added a pic of the ring.

On the flip side of things, I have been frustrated lately with people being unable to peg me as being gay. Sometimes it would make things so much easier.

Jeeesh, some people need to get a life!

I am so fed up with this state's homophobic sneering and harassment. Really, I completely agree with the fact that you are allowed to hold convictions and religious beliefs regardless of your sexual orientation. The number of times I've heard this same sort of conversation is just ridiculous and I'm sorry you have to put up with it. Well done dealing with that gracefully, though.

I'm with El Genio, actually. It's pretty annoying in fact.

How *did* she know, anyway?

The odd, and sad, part of it is that that woman was likely proud to have "Chastened" a Homosexual. Does she know, I wonder, that it makes her look like a closed minded and abrasive person? When will people realize that bigotry, and hatred, are not tools of intellectuals, but the tools of raging mobs of uneducated peasantry? I rarely get picked off as gay, my voice is much deeper than most, but when it happens...I always get extremely calm and collected. I have a script that I have written for just such occasions, that I have memorized where I can gentility offer a rebuttal to their homophobia, and make them look like children when they respond...I really love using words as traps...Dirty tactics yes, but it is juvenile to fear what you don't understand, and those that accost us...do not understand.
Have a great day BigRed.
BHG