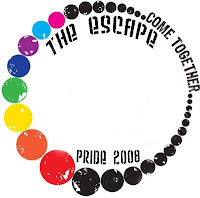 I had a thought today. I've written about many topics on this blog. Since coming out here in November I've had a lot of topics to write about that I didn't before. To some extent I've been able to integrate friends from both sides of my life. I have been pretty successful in becoming integrated rather than compartmentalized. The thought that occurred to me today was to be thankful for one of the sources of that change.

I'm currently (and have been for almost five years) one of the moderators of a group called The Escape. When I lived in Provo and was attending BYU I became friends with a guy named Jeromy. He is gay like I am and my age. We hit it off very well. He had just started a group he called The Escape. Basically Jeromy opened his home to host activities where other gay people and their friends could come to socialize, watch movies, play games, and other activities. He created a Yahoo group so he could announce the various activities. One of the tenets of the group was that alcohol is not needed in order to have a good time.

I remember the first time I went to an Escape party. It was the second one ever held. I was very nervous. It was my first time being at a gay event. I had to convince myself that I could do it. I remember showing up and feeling very out of place. Everyone seemed at ease. For those of you that don't know me well, when I am in a group of people I don't know I get really quiet. I'm sure I said very little at the activity. I remember Jeromy saying hello to me. But he was hosting the party and couldn't spend much time with me. It reminds me of the feeling when I was first off my mission and went to a Christmas party thrown by some relatives of mine. It was a feeling of subdued panic. I was tense. Afterward, I was glad I went. It was far outside my comfort circle. I didn't talk about anything at the party, but it was good to hear other people talk about being gay like it was an everyday thing.

I became very good friends with Jeromy and became part of the planning process for The Escape. Most of those early parties were pretty simple. We'd watch movies and socialize. I met the first guy I ever dated at one of those parties. I remember holding his hand as we watched a movie. We got creative though. We had a Vegas party once where we built and created our own Vegas-style props for the party. That party was huge! The place was packed.

Jeromy and his boyfriend moved away and I volunteered to lead the group. Sadly, nothing happened while I was in charge. I didn't own my own place and we didn't have a place to host activities. The group just stayed on hiatus until Jeromy returned.

The next largest change occurred when Aaron (my boyfriend) and I moved to Salt Lake City. Jeromy now lived in BYU-approved housing and couldn't host The Escape any longer. Aaron and I started having it our home. The Escape changed. No longer in the shade of secrecy needed to operate in Utah County the organization made a big change. Just as Jeromy, Aaron and I had evolved into openly gay, integrated, and happy men, the scope of the group was doing the same. We began having larger activities and in the public. We host Gay Day at Hogle Zoo. We are a large part of Gay Day at Lagoon Park. We play croquet and barbecue in the park. You may have seen pictures of these activities on my facebook page. Aaron and I have welcomed many people into our home under the umbrella of The Escape. Now, rather than giving closeted gays a place to be their selves (and we still do that), we help gay men choose happy and healthy lives.

I think another era is opening up for the group right now. The Escape has been largely insular until now. We didn't allow other groups to advertise on our Yahoo group. We wouldn't let other people host activities. We never did anything with other groups. We're changing that. Salt Lake is a much larger place with many more resources. We have begun to network with the other gay and lesbian groups here. Last week I had a phone interview with QSaltLake, Utah's gay news magazine. They had seen our facebook group and our planned Gay Day at Hogle Zoo. I'm hoping they'll do an article beforehand and we'll get more people to show up. We recently changed our age policy too. Before this month, we encouraged people over 40 to find a group better suited to their situations. We've removed that. We're open to any age. I think all of these changes are going to be incredible! It has meant losing some control that we kept tight, but it is going to make very positive changes.

Thinking about this just gave me another great idea!
Posted by BigRedHammer at 12:30 PM

Wow, this sounds great. Living at a bit of a distance I had no idea this group existed. Now I'm even more likely to watch for opportunities to stop in Salt Lake.

I am glad you changed the age category. Otherwise, old folks like Alan couldn't attend. I on the other hand am much younger and would still qualify. :/

That's awesome. In fact, there is something similar like FHE, movie night, socializing, looking for support, run by a family up in Lehi just for any gay BYU students that want to go and escape the campus pressure. My bro in law use to go to it every Monday night and he loved it.