If you have been following my blog, you know about the current planet debate going on. Just a quick overview. A new planet-candidate was discovered outside the orbit of Pluto. This has caused debate as to a formal definition of planet. There is currently not a definition of planet for astronomers. The International Astronomical Union has set out to make such a definition.

The IAU has proposed the following as the definition of planet: “A planet is a celestial body that (a) has sufficient mass for its self-gravity to overcome rigid body forces so that it assumes a hydrostatic equilibrium (nearly round) shape, and (b) is in orbit around a star, and is neither a star nor a satellite of a planet.”

This definition does more than make concrete Pluto's status as a planet and Xena's invitation into the family. With this definition, Pluto's (former) moon Charon is now a planet. In fact Pluto and Charon will be considered a double planet. As well, Ceres (a large celestial body in the asteroid belt between Mars and Jupiter) is welcomed to the family. This will make the planet family a large one of twelve!

Some additional definitions will be introduced. These include: plutons, dwarf planets, and double planets. 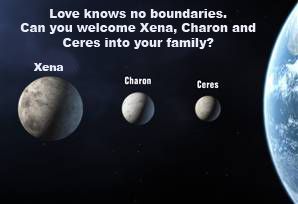 Pluto and Charon will be considered double planets. They rotate around each other, where the center of gravity is outside the surface of either planet. The eight planets (excluding Pluto) are considered "classic planets". This is only a historical term, not a IAU definition. If this new definition is adopted, it could result in many more 'planets' being discovered. Astronomers and scientists already believe as many as two dozen exist.

I for one am all for this new definition of celestial bodies. After all, science is the discovery of new ideas and principles. We should not bind ourselves to a definition when new discoveries contradict it. Definitions are made for science, not science for the definition. I welcome Xena, Charon, and Ceres into our planetary family.

What do you think? Leave a comment on this blog. As well, vote in MSNBC's poll, here. To read more about the discovery and changes in planetary matters, go here and here.

Posted by BigRedHammer at 1:14 PM

They've decided that Pluto's no longer a planet - MSN has an article about it.