Movies of the Future!

I've been checking out the movies on the horizon... and there are mixed reviews. But that's the case generally. So! I bring you some of the most interesting or odd or well, whatever. Here they are:

The Simpsons Movie
I love the Simpsons. They are clever, multi-faceted, and just plain funny. This fall will mark their 18th season. If the Simpsons weren't gold, they wouldn't have lasted this long.

And really, Fox must be grateful to Simpsons for giving them a reliable hit. But the show did hit its peak several years ago. The jokes weren't funny and it had lost its savor. The makers of the show had promised that they would make a movie when they ended the series. I will be sad to say goodbye to that dear family, but the DVDs will give us plenty of Simpson joy for well past another 18 years. Wow. Eighteen years. There are kids graduating that were born into a world of Simpsons. But I digress. I don't expect much from this movie besides a fond farewell. I can at least hope for a clever laugh and one last D'oh!

Teenage Mutant Ninja Turtles
Unlike the Simpsons, the Turtles don't have a sewer to sink lower to. The Turtles franchise is about as low as it can get. The movies were uninspiring and more importantly, not funny. So there is only room for improvement. It looks as if the entire movie will be computer animated. This is a mixed blessing. The movie can easily fall into the "elementary crowd" and fail to please those of us who grew up with the Turtles and consider them retro. I don't expect a lot. 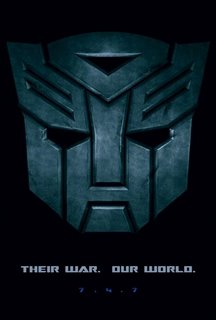 Transformers: The Movie (again)
For those of you who didn't know, there is already a Transformers movie. It was good too. Completely animated in the ancient style of cel animation. The plot was interesting and it fit right in with the entire franchise. Why don't I own this movie? *shakes head* I am very wary about this new movie. Transformers sits in the hallowed land of my childhood. I loved the cartoon and the toys. By making a new movie, it has the chance to ruin those memories. As well, it will draw a new crowd believing that they have a connection with Transformers. Ha! Half of them weren't even born when the show was on tv. It demeans the boy fandom for those who grew up with it. 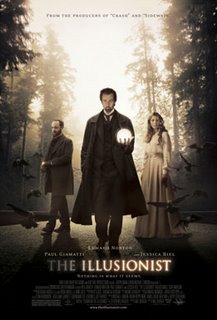 The Illusionist
I had not heard of this movie until I was exploring quicktime.com. The trailer really intrigues me. It seems both mysterious and inviting. I also really like the style of this time period. Is it Victorian? I'm not sure. And I love the goatee of the protagonist (antagonist?). It is refreshing to see a story that isn't a rehash or remake or reconstitution of an old show, movie, or comic book. It seems that Hollywood doesn't have anymore new ideas, just new ways to present them. I long for this era of remakes to be over. Let's be original folks!
Posted by BigRedHammer at 3:49 PM

I hope you're wrong about "The Simpsons" movie, but I fear you're not .. if you look at the recent seasons, it has been a slow decline