I was just messing around with the buttons on my Yahoo messenger. There is a "Buzz" button which lists the top searches for Yahoo in various topics like "Television Movers" and "Movie Movers". I looked at the television movers and at number four was "Tuesday Night Book Club". I had never heard of it. But I recalled seeing little fliers from Relief Society on Kate's and red brick's doors. The fliers said something about a book club or something. So the link in the Buzz interested me. Perhaps the RS was doing something with a national group. So I clicked on the link and I found out it was a television drama. The tagline is this:

"A CBS one-hour series which follows the lives of a group of real women as they deal with the day-to-day pressures of raising kids, maintaining households, satisfying their husbands, and keeping it together on a personal level."

I followed the link. And here's the pic of the cast: 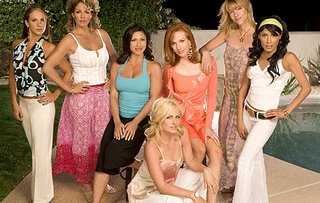 And the first word that popped into my mind was: bullcrap! So much for "a group of real women". Not one of those women looks remotely real, average, or normal. Heck, they're not even standing/sitting in "real" positions! I guess they're "real" in the fact that they were all born to parents and they're not a figment of my imagination. But if CBS is trying to pass them off as "real" they need to try a lot harder. This show is just a "Desperate Housewives" knockoff. Hearing all of this may sound odd coming from me, seeing as I'm a semi-anti-feminist and I hate political correctness. But I find this ridiculous. What do you think?
Posted by BigRedHammer at 2:28 PM

I completely agree- not one of them is "real." Like the old joke, you wanna know Victoria's Secret? No woman really will ever look as good as the models! Same for this. I am a real woman and I have a child, a professional career and and am single, so I have to do it all alone at home AND try to have a personal life. Hunny, to do it all and look like that...just ain't gonna happen. More accurate would be a harried expression, a bit of baby vomit on a shirt and a pimple from stressing over lack of money for Johnny's college or b/c hubby was boffing the babysitter. These women look as their biggest "real" problem is scheduling a mani and pedi on the same day and not interfering with Johnny's violen lessons- but the nanny can take care of it if necessary.

ooooo- I sound so very... jaded, shall we say? Maybe a bit snide? Hmmmm, I am aiming for real!

::snicker : Yeah, Housewives wear inconvient tank tops that their kids will ruin in 10 seconds flat ALL the time, oh and their shoes are soo practical. Heck, I don't know that many women outside of LA who would be wearing those clothes, let alone mothers with kids!

I don't know, that one on the far right looks pretty realistic.

But really, I agree, not real at all. Manufactured images, the whole lot of them