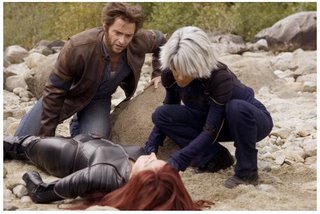 So earlier this week I went and saw X-Men 3. But before I begin on that, I want to give a disclaimer. I'd actually prefer if you didn't read this review until after you've seen the movie. I don't want you going in there expecting this or that and have it jade your view on the movie. I will not give any spoilers in this review, so don't worry about that.

The move is good. The acting is well done I think. Hugh Jackman and Halle Berry do very well as their characters. You get to know Storm a little more than previous. (But you might have expected that, as she told the franchise that she wouldn't do X3 unless she had more screen time.) But I have no complaints there. Storm is an excellent character. The action sequences are good too. It is exciting. Those who liked the first two movies will enjoy this one.

That said, here is what I didn't like about the movie. It was only mediocre. The character development was kept very minimal. While there were many changes in storyline and character development, we didn't get to see any of it. For example (a broad one), a sub-character in the movie comes to a decision which will alter her life. Rather than see how she works through the process or how it affects her family and friends, we have a two step process. First, she states what she's thinking about. Second, she's already done the deed. And that's it. It happens that way on almost every issue "tackled" in the movie. The two main focus characters (Wolverine and Storm) aren't tackling tough decisions, there isn't character development with them at all. My friend Aaron said it right, "This is like half of a movie!" The writers, director, and producer needed to add a whole lot more character development and let us learn what these people had to face. This really was the "Hugh and Halle show".

The movie also had some jaw dropping events. But they didn't pause on them at all. We didn't have a chance to take them in before they were glossed over. It felt like someone was giving a synopsis of the full movie.

So all in all, I am disappointed with X-Men 3. It had such a great potential built up in the first two movies (especially the second). But it failed to meet them. So I give this movie a B-. Sad.
Posted by BigRedHammer at 3:56 PM